When we finished the campaign in January 2016, we had a working prototype and our goal was to make it smaller so virtually anyone could fit in.

The miniaturization process was a hell lot more complicated than we thought.

You guys saw updates after updates what we went through.

The supply chain was freaking hard to get correctly and now the connectivity is quite nasty to nail down.

We got the PCB manufacturer right after many tryouts.

We got to a form factor that was slightly bigger than what we hoped for but still a lot smaller than the vast majority of earbuds out there.

We hired a star consultant for our antenna tech.

And we had significant connectivity improvements so far. I would now qualify the connectivity to be good but not totally great.

Is it good enough? It depends.

When it works really well:

We only tested on 4 people, so we definitely need more data to be sure of those results.

My apartment is about 10 min walk from downtown Montreal. My wife and I had experienced great earbuds connectivity in our apartment (around 500 square foot).  However, when getting in the hallway of the apartment tower, there were over 100 wireless signals so it was affecting a lot the connectivity. The right earbud was frequently cutting.

Sylvain tested a bunch of tuning techniques and components variation to get the best results. 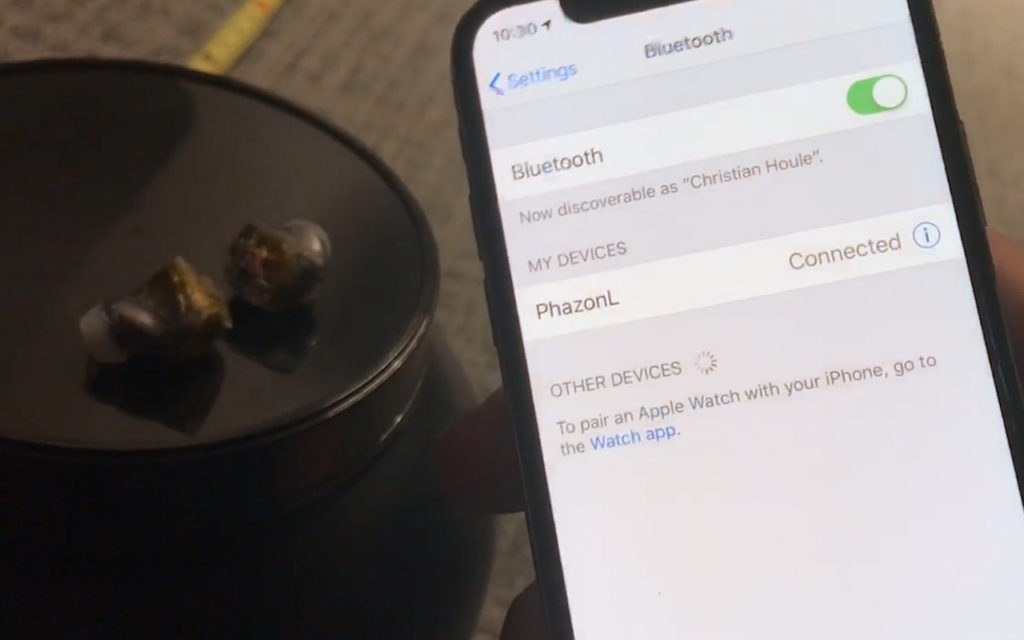 Earbuds connecting in the hallway.

He identified new ways to improve the connectivity so people with deep ears or heavy wireless environment would not be affected (yet to be tested).

Honestly, I’m not yet totally convinced those suggested improvements will make a drastic difference to eliminate completely the underperforming situations. However, I’m willing to wait a little more to see Sylvain improvements and the input of more beta testers. There is also a proven tech we could implement but it will take at least 2-3 months to get results.

That’s why I’m thinking of bringing beta testers in Montreal in April to have a better idea with more data points to see if we need to bring in the proven tech.

Meanwhile, we will do a live Q&A with Sylvain in this month of March. We already did that with the backers’ committee and they liked it. We will not answer financial questions. We welcome both technical or non-technical questions about this project. Places are limited.